In case you missed it... The LA Times Reviews Echo Park Bars 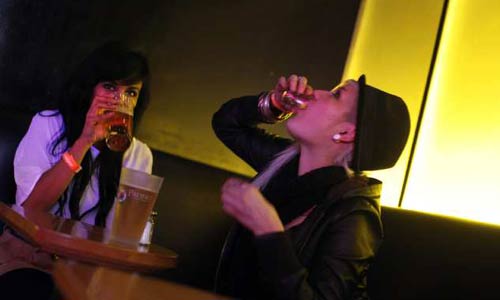 You can read the LA Times Article here:

Over the last decade, Echo Park has morphed from a largely ethnic neighborhood populated by mom-and-pop shops and small restaurants serving simple Mexican and Central American fare to one of the hottest bar-hopping neighborhoods in town. With more than a dozen bars and restaurants within walking distance along Sunset Boulevard and more on the horizon, the neighborhood is changing into the "it" place to be at night.

Tentatively scheduled to open in mid-February, this 10,000-square-foot full-service bar and restaurant is being built in the nearly 100-year-old Ramona theater next door to the vegetarian hot spot Elf Cafe. On the menu: farm-to-table California fare with plenty of vegan offerings. Plans for 73 California craft beers on tap, as well as a large selection of California wines and spirits, will make Mohawk Bend a bar unlike any other in the neighborhood.
2139 W. Sunset Blvd.

Owned by the charming Nicole Daddio, City Sip filled Echo Park's wine bar void in late 2008. The prices are moderate and the wine list is filled with boutique-style wines from small-scale producers. A skilled sommelier, Daddio is generally on hand to guide customers through tasting flights and to recommend the appropriate charcuterie to go with an order.

In Echo Park since 1962, this old-school neighborhood mainstay is family owned and serves up rich French fare with liberal sauces. The restaurant is massive, but the main gathering place for the night-life crowd is the large front bar, with its multiple TV screens, a roaring fireplace and suited bartenders. Occasionally, live music is on offer.

4 and 5. The Echo and the Echoplex

Owned by Mitchell Frank, whose Spaceland Productions came to define the Silver Lake music scene in the early to mid-2000s, the Echo and Echoplex are two live music venues that draw crowds from across town and headliners from all over the world. With a nearly 700-person capacity, the larger Echoplex is unique in size on this side of town.

This tiny, coffin-shaped record shop is run by Neil Schield who is tapped into both the neighborhood and its vibrant and growing music scene. Schield also hosts occasional live-music shows in the loft above the shop.

An extension of Mitchell Frank's empire, El Prado is a tiny beer-and-wine bar across the street from the Echo. The walls are exposed brick, and there is a long wooden bar where sophisticated sippers chat idly and listen to music from a record player.

Opened in 2004, Masa was one of Echo Park's first new wave restaurants, offering authentic, deep-dish Chicago pizza to a neighborhood more familiar with tacos and pupusas. With a country-kitchen feel and a laid-back staff, the restaurant also doubles as a wine-and-beer bar.

Run by Bill DiDonna and Charles Kelly, this friendly neighborhood restaurant specializes in small plates of international fare and specialty drinks. A cheerful yellow color scheme, a friendly staff and a bustling bar make AYC a destination for a clever cocktail and conversation.

The Gold Room draws a rowdy crowd of locals and thrill-seekers with its $5 beer-and-tequila combos, plentiful peanuts and free tacos. On nights when there are deejays, it can be exceedingly loud. Escape to the tiny outdoor smoking area if you can squeeze in.

Serving incredibly cheese-laden Mexican food since 1961, this sprawling split-level restaurant made a name for itself among starving artist types when it began offering sticky-sweet margaritas for $2.50 every Wednesday night alongside all-you-can eat chips, salsa and processed cheese.

Once a hole-in-the-wall that served a primarily working-class Latino crowd, the Little Joy began hosting a weekly country music night in the early 2000s and swiftly became one of the coolest destinations in a neighborhood populated by artists, writers and musicians. A change in managers put an end to its ultra-hip status, but it still draws a crowd of thirsty drinkers.

Opened under new management in December 2000, the Short Stop was on the vanguard of the new wave Echo Park night scene. Partially owned by former Afghan Whigs frontman Greg Dulli, it had cool cachet from the start. A thriving dance floor, pool table and plentiful Pabst Blue Ribbon made it the neighborhood's premiere destination for years.

Known for its flaming margaritas, El Compadre serves up massive plates of Mexican food in a dark restaurant next door to the Short Stop. A small bar and live mariachi music make it a great place to while away a tequila-laced evening.

Simple, clean and white-walled, the Park serves American bistro fare to a relaxed neighborhood crowd and recently obtained a wine-and-beer license for diners who like to linger.

South of Echo Park Lake on Temple Street, this low-key beer-and-wine bar opened earlier this year far from the main drag, proving that the neighborhood has become popular enough to maintain an outpost on the outskirts.

A carpeted Asian bar that resembles the set of a 1970s martial arts film, Dinner House M has a sunken rectangular bar and attracts a party-minded late-night crowd.