"BOBBYWOOD: No Love for Lucy", a Storytelling Performance by Bill Ratner 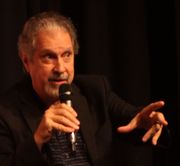 "BOBBYWOOD: No Love for Lucy", is a theatrical performance of a darkly comic, original story, written and performed by renowned Hollywood voice artist, Bill Ratner, (one of America’s Most Heard voices).  Bill is a voice-over announcer for television stations across the U.S., the movie trailer voice for numerous films, and the narrator of several television series.  He is also  famous for his many computer game and cartoon voices, and his stories on NPR.

“BOBBYWOOD” is  Bill’s quest to solve the mystery of "what ever happened to "Bobby the Bellboy" from the original I Love Lucy television series.  "Bobby" was Bill Ratner's uncle, Bob Jellison,  familiar to millions of I Love Lucy  fans as he staggered into Lucy and Ricky's hotel suite with luggage, laundry and priceless dialogue; but he later disappeared from television and dropped off of his family's radar. This story follows Bill as he comes to Hollywood in search of "Bobby" and his discovery of the real man. A catered reception is included.

RSVP for "BOBBYWOOD: No Love for Lucy", a Storytelling Performance by Bill Ratner to add comments!