Throughout the month of May, every Friday night, the doors will re-open at 10:45pm (following the 8:00pm performance of Re-Animator The Musical) for Midnight Madness – featuring all ages preshow events with bands and free beer (21+ with ID) followed by a midnight performance of the musical. The final two Friday Midnight Madness shows feature the mathrock mayhem of Solar Wimp on Friday the 20th, and monster mash garage by the Tulsa Skull Swingers on Friday the 27th.

Re-Animator - The Musical, the horror-comedy based on Stuart Gordon’s 1985 cult movie hit and earlier H.P. Lovecraft story, runs through May 29 at the Steve Allen Theater.  Gordon is also on hand to direct the new musical.  The performance schedule for this funny, bloody and tuneful production is Friday at 8:00pm and Midnight (it's a horror show, after all), Saturday at 8:00pm, Sunday at 3:30pm and 8:00pm. Ticket prices are $30 for general admission, $15 for Center for Inquiry members, and $15 for students (with ID).

Re-Animator - The Musical is the story of research student Herbert West, the serum that he creates to revive the dead, and the havoc that he creates for the people of the college town where he resides.

"Two thumbs up. If you count the bloody severed thumb, then it's three!"  Flavorpill
"Terribly inappropriate … it's glorious!"  KCRW 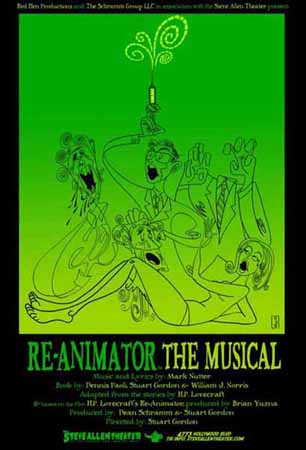