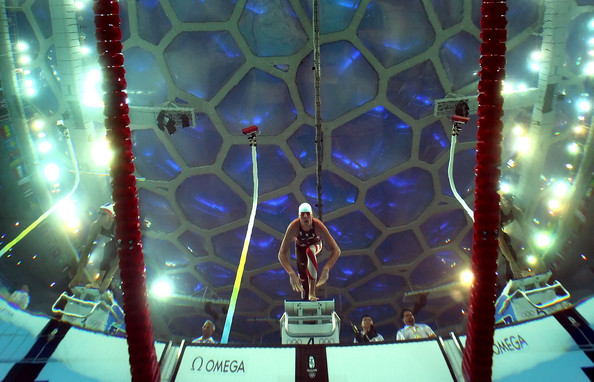 Two swimmers, Bob Beresh and David Walters, are opposites when it comes to skill-level. Beresh, a beginner, started attending organized, coached workouts about two months ago. Walters, a national standout, competed on the U.S. 4x200 freestyle relay with Michael Phelps in the 2008 Olympics.

But they both share a struggle that anyone trying to exercise can relate to: getting moving during the winter months. In particular, jumping in the water in weather that makes most people want to grab a sweatshirt or umbrella.

“Just show up. That’s my advice,” Walters said. He also holds the American Record in the 100-meter freestyle. “The relief of accomplishing it motivates you to make it to the next workout.”

After his last competition in 2012, Walters took a break from swimming. Although he enjoyed surfing, he found that it did not provide the same intensity he was used to in a workout. Finally, as a New Year’s resolution, he started swimming with the Southern California Aquatics (SCAQ) club at the University of Southern California.

Walters said when he returned; he was not in the fast lane. “I’m taking it one day at a time. It seems like everyone at SCAQ is trying to improve so it’s very motivating. We push each other.”

Even though Beresh is new to the water, he has already found a home with SCAQ. When he first started attending workouts, around the same time as Walters, he couldn’t make it to the other side of the pool without getting winded, such that he had to stop and couldn’t make it back. Now he can swim 1000 yards without stopping. His wife, Robyn, is a “superstar swimmer” who has been with SCAQ since 2009. At first Bob was worried that he would be invading her territory, but now they can attend workouts together.

Winter may seem like an odd time to pick up a water sport, but Beresh has friends who keep him grounded.

“All of them are open-water swimmers who don’t wear a wetsuit, so they would’ve laughed at me if I complained,” he said. “There’s a real beauty to swimming in conditions that aren’t ideal.”

To sign up or find out more, email: news@swim.net