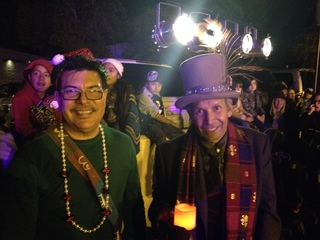 The parking lot of Wells Fargo Bank at 3250 Glendale Blvd. in Atwater Village last night, December 3, 2015, was a sea of area residents and their families. Officials estimated 1,000 people were on hand.
Free hot cocoa was available as the audience watched a succession of performances onstage, with Glendale Boulevard in the back round. This year's event was co-hosted by actors Camilla Cleese and Phil Donlon as everyone waited for the lighting of the 85-foot tall redwood tree nearby. John Paul DeJoria also appeared as a special guest.
DeJoria, 71, and a founder of John Paul Mitchell Systems , grew up in Atwater Village, attended Atwater Elementary School, John Marshall High School, and commented how the area still looked "pretty much the same."
The onstage acts included the Glenfeliz Elementary and the Holy Trinity School choirs. Soprano Rebekah Ann Barton belted out our national anthem, and while the old Jackson 5 song played "Santa Claus is Coming to Town," a Los Angeles City Fire truck brought Santa and Mrs. Claus to the crowd. And Los Angeles City Councilman Tom LaBonge, whose wife Bridget started the tree lighting event 24 years ago, also appeared. 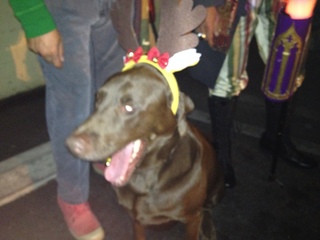 L.A City Councilmember Mitch O'Farrell of the 13th District said Atwater's is the best tree lighting in the city.
In the audience were Al Garcia, Lorenzo Herrera, and their chocolate- colored, 94-pound lab, Bosco, who was wearing festive reindeer antlers. Garcia, an immigration interpreter, and Herrera have been coming to the ceremony for the last 10 years, Garcia said. "It's a community event. You run into a lot of neighbors."
Story and photos by Clint Lohr, who also a Realtor with Keller WIlliams Los Feliz

Poet Jennifer Thompson explains why she chose to attend Cal Berkeley over tha likes of tha other UCs.The point of our interviews is to give local artists opp...
Jun 17
0 Comments 0 Promotions